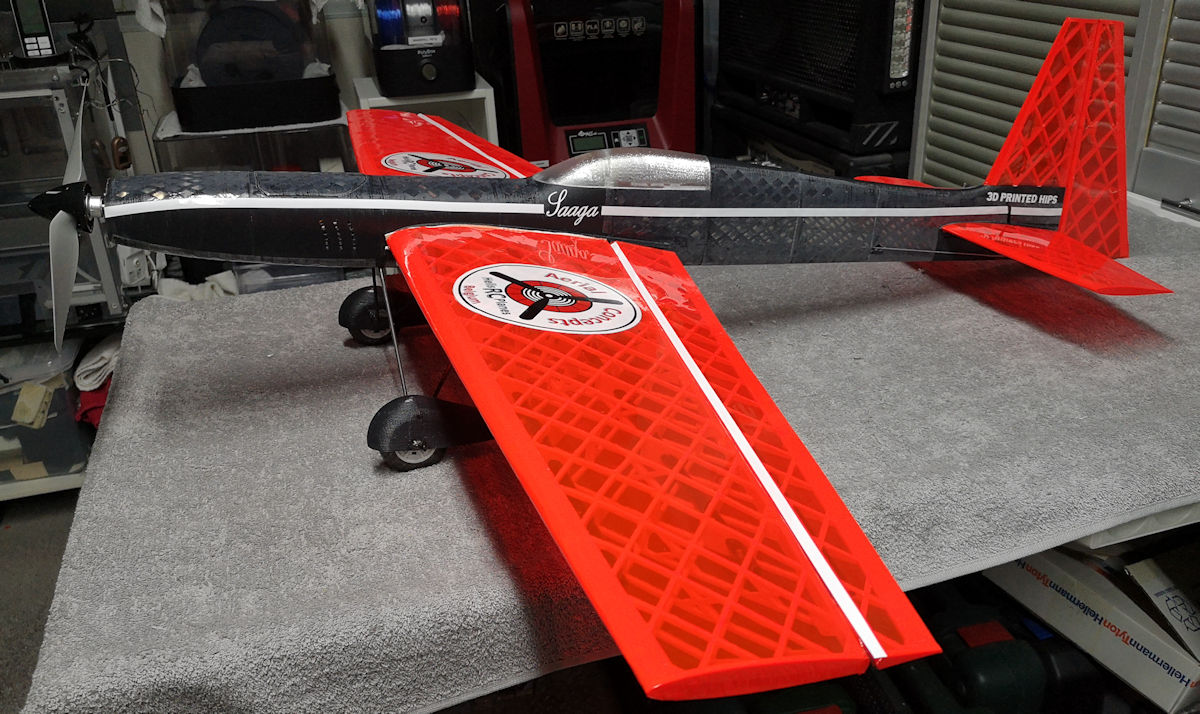 This RC Acro Airplane was my second printed RC airplane. The Maripi is also an RC airplane designed by Kraga. More information about my printers and software you will find in my other post on the Kraga Kodo. To experiment when further with the 3D printed airplanes, I choose to make the second plane in another material HIPS - High Impact Polystyrene. The combination of carbon struts, covering film, lightweight design, and the fuselage with carbon reinforcement has proven to be successful.  I choose the white and black Makerfill HIPS filament and Oracover Red Transparant Fluorescent film. High impact polystyrene (HIPS) is a material blend of polystyrene plastic and polybutadiene rubber. The mixture of these polymers results in a material that’s both tough and flexible. HIPS is very similar to ABS, but as the name implies, it’s capable of withstanding much higher impact forces. It’s easily painted, machinable, and works with a large number of adhesives. I designed some extra parts in FreeCAD 0.18  as battery support, a receiver-, and gyro support, wing base and wing ends. Some of my Printer settings are; minimum volume 200x200x180 mm, Extruder 0.4 mm, Layer Height 0.19 mm, Extruder Temp 245 ºC, Filament Speed max 40 mm/s, Bed 90 ºC, Cooling 0%.

MOD1: Modified the main wing connection with printed and glued HIPS base plate on the main wings and two super magnets and modified extra flexible safety connection.
MOD2: Modified tail section with extra HIPs elevator and rudder parts to close the surface ends
MOD3: Printed a semi-transparent cockpit in PET-G for the looks and to test this material.
MOD4: Added A3Pro Gyro from Hobbyeagle to improve stability and to test the auto hoover mode.

A successful maiden flight, but only with the help of the A3pro gyro's, because de Centre of Gravity was not forward enough. I had to add extra weight left and right of the motor and glued in with a hot glue gun. After more flights seem this plane performs well, but the HIPS material seems to crack easily when you hold the wing firm, probably because of the different material properties between HIPS and original by Kraga proposed PLA. Not done too much Acro till now. No crashes so, fortunately, I can not evaluate the HIPS resistance to impact forces.

Aircraft Characteristics after Configuration and Modification 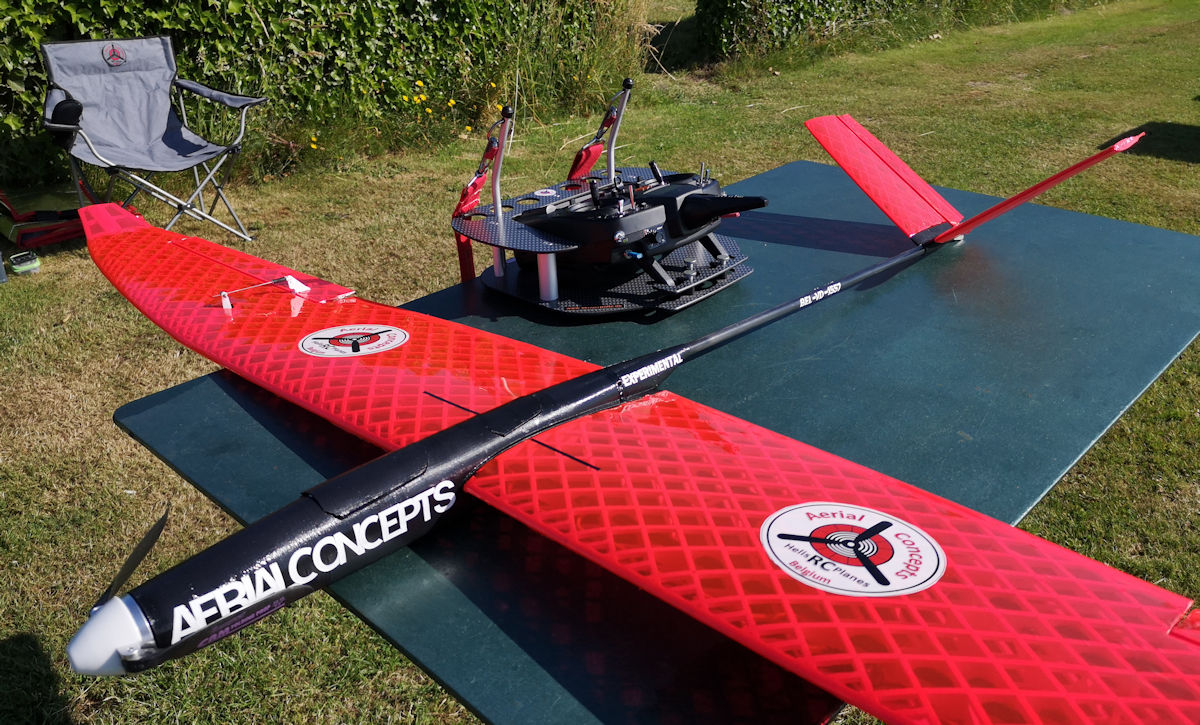 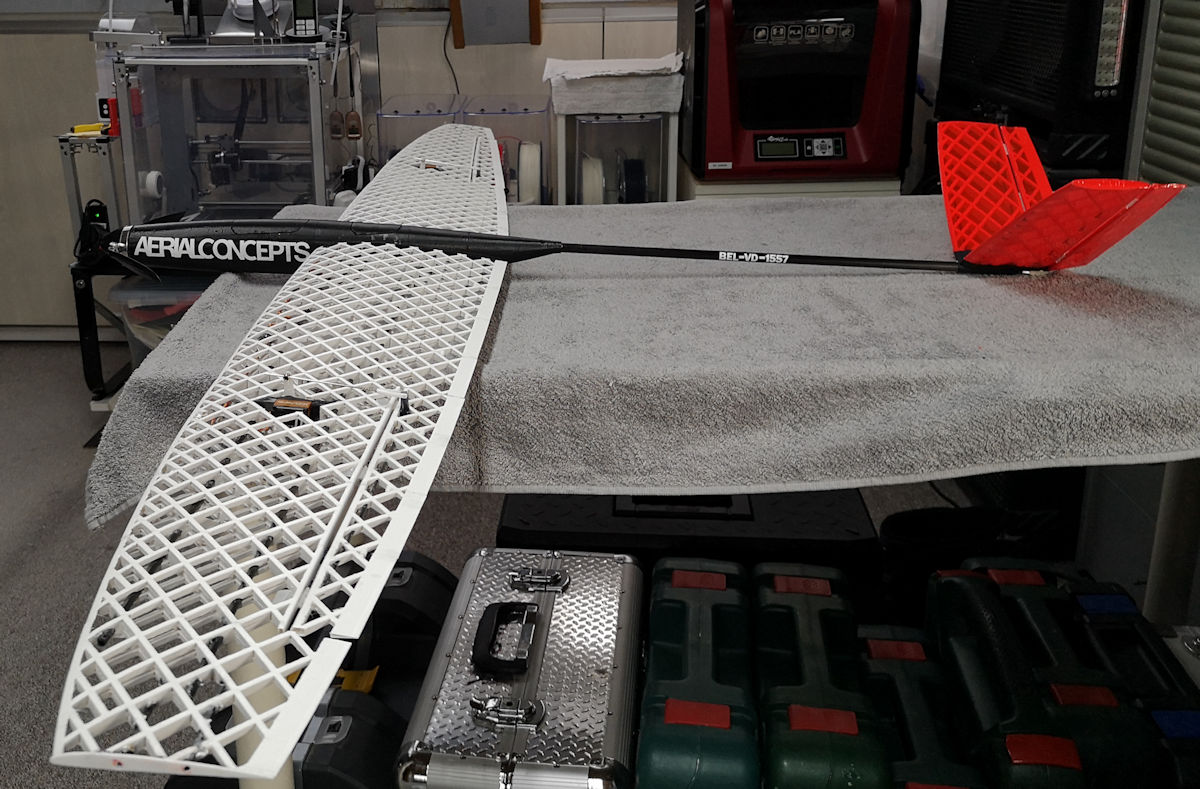 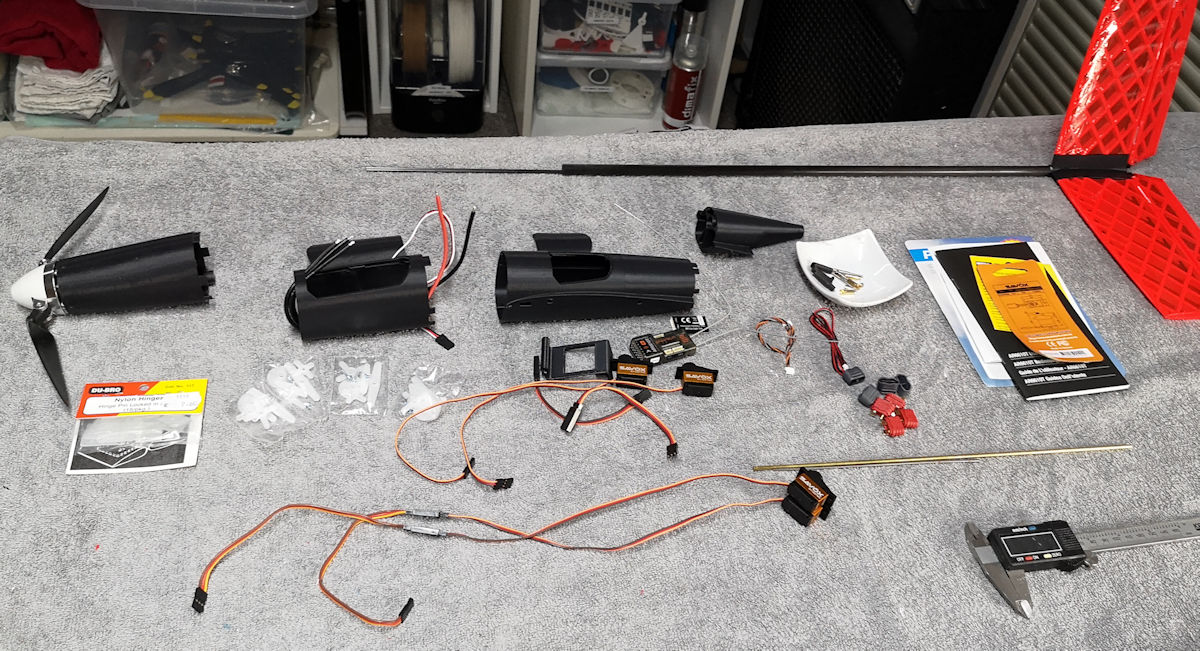 This glider was my first attempt to print an RC airplane. Beginning 2019 I started to explore 3D printing. My first printer was a Da Vinci Jr 1.0 Pro from XYZprinting. The advantage of this printer is you didn't have to use only the filament from the printer manufacturer. The cons are small and not heated bed with limited slicer software. So I could experiment with PLA filament of different manufacturers and use other slicers like Cura. Finally, now I use the Simplify3D slicer, and mostly Polymaker and Makerfill filament. I try to keep the filament dry in some Polybox containers from Polymaker, use an Esun eBox Filament Dryer as a feeder. In September 2019 I bought a Balco Touchscreen 3D printer. This printer originated from a Wanhao Duplicator I3 plus. I did a lot of printer modifications, like a Plexi enclosure with some rpm-controlled fans, a glass plate on the bed, a Microswiss All metal Hotend with a Slotted cooling block, and a CNC Machined Lever and Extruder Plate. I Have upgraded the Balco firmware to ADVi3++ and use a Raspberry PI with Octoprint software and the Printoid App on my Android phone.  To connect to my printer from anywhere I have a separate Raspberry PI gateway with OpenVPN.

When looking on the Internet for 3D printed RC airplanes I was charmed with the design of the Kraga Kodo. Here you can read the story behind Kraga. The combination of carbon struts, covering film, lightweight design, the compact fuselage with carbon reinforcement, and carbon tail tube.  Because of the rather low deformation temperature of PLA (55 ºC) and limited UV resistance I choose the white and black Polymaker Polylight ASA filament and Oracover Red Transparant Fluorescent film. ASA is light UV improved ABS with higher temperature (75 ºC) resistance before deformation than PLA. Polylight ASA has a lower specific weight of 1.04 g/cc versus 1.27 g/cc for PLA. I designed some extra ASA parts in FreeCAD 0.18  as battery support, a receiver-, and gyro support, some new tail horns, and winglets. Some of my Printer settings are; minimum Printing volume 200x200x180 mm, Extruder 0.4 mm, Layer Height 0.19 mm, Extruder Temp 245 ºC, Filament Speed max 40 mm/s, Bed 90 ºC, Cooling 0%.

Electronics for this Kodo

MOD1: Modified the main wing connection with printed and glue base plate on the main wings and two super magnets.
MOD2: Modified the carbon control rods and newly designed ASA tail horns for the control surfaces of the V-tail to make steering directer and without play and binding.
MOD3: Added winglets to the main wings to try to improve the stability of the main wing and reduce the twisting forces when taking fast turns.
MOD4: Added A3super 3 Gyro from Hobbyeagle to improve stability and still to be able to use the ailerons as spoilerons to reduce landing distance.

A successful maiden flight. Good protection connection of the main wing, because I had a not so perfect grass landing, and on one wing part separated without any damage! There were some remarks from spectators about the flexibility of the main wing. They believed that the main wing would not hold, but it still does. A good gliding angle. I had to use the spoilerons to slow down the glider in the final landing phase to make it easier to land on the grass runway. After more flights and more wind, I experienced probably twisting of the main wing and in a low fast turn and had a crash, probable because of the twisting and some play on the V_tail steering.  I had only to replace the tail carbon rod and glue some cracks in the fuselage and one of the wings. Impressive little damage after flying into the ground. I modified the steering for the V-tail and installed the HobbyEagle A3super 3 V2 programmable 6-axis gyro. Did some more test flying. This plane performs well but the rather large flexibility of the main wing in ASA remains a weakness, probably because of the different material properties between ASA and original by Kraga proposed PLA.